Krystal Riddell says she’s proud to be part of a funeral industry growing in gender diversity.

The 30-year-old funeral director and owner of Essentials Cremation and Burial Services Inc. in Niagara Falls said the death-care profession, which for the longest time was predominantly run by men, is changing.

“Nowadays there is a good mixture of women and men,” she said. 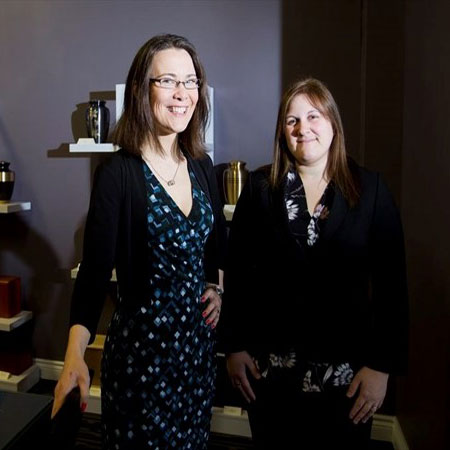 Krystal Riddell, right, funeral director and owner of Essentials Cremation and Burial Services Inc. in Niagara Falls and Natalie Proulx, who is a licensed funeral director, celebrant and bereavement educator with her own business, Facing the Sun, are part of a growing number of women in the death-care profession.They are photographed in Niagara Falls on Monday. – Julie Jocsak , St. Catharines Standard

She said Essentials, which is located at 4300 Drummond Road, is a funeral home alternative.

“What I have to offer is basically affordable services for families once they go through a loss of a loved one. I can help people with arranging for cremations, burial and we’re also trying to support a green burial movement.”

Riddell said because her business is new and small, she primarily runs the day-to-day operations “until we really get off the ground and we start having a more established call volume.”

“A lot of support comes from my family.”

Riddell said it was the death of her stepfather when she was 16 that made her think about getting into the funeral-service industry.

“That was really a devastating time to understand why something like that had happened. Going through an experience when we had to look after those arrangements for my step dad is really what led me to become a funeral director.”

She said more women are going to school to get involved in the profession today than in the past, which she’s glad to see.

“I think through the years a lot of women didn’t have the confidence to be in that leadership role and to have the confidence to do a great job. Aside from the physical aspect of the job, I think a big part of being a funeral director is being able to nurture people, being able to look after them and to care for them and to have that compassion. Women are very much caregivers, if you will.”

That being said, Riddell noted she has met “some really amazing, very compassionate men” in her career.

She said during the last number of years, she has built special relationships with other businesswomen in Niagara, who like Riddell are community minded and involved in a lot of community organizations.

One of those women is Natalie Proulx, who is a licensed funeral director, celebrant and bereavement educator.

Proulx has her own business, Facing the Sun, and acts as a master of ceremonies at personalized services.

“Families could come to me if they wanted a religious aspect, if they wanted their funeral ceremonies to be celebrated outside in the park — I’ve done them at the falls side, at the carnival, at the beer store,” said Proulx.

“It’s completely inclusive to whatever religious or non-religious ceremonies someone would want. I’m fortunate enough that funeral homes like Krystal’s and many across the region call me.”