In Loving Memory of

It is with extreme sadness and heavy hearts that we announce the passing of Richard Szatkowski, on Monday, May 24th, 2021 in his 74th year. He passed away very peacefully with his loving wife by his side. Richard was diagnosed with pancreatic cancer in 2020 and lived his life to the fullest without any pain. He was predeceased by his parents Alfreda and Aleksander and younger sister Danuta back in Poland. Richard is survived by his loving wife of 36 years, Alicja, and daughter Marta whom he adored, loved and was very proud of. He is also survived by numerous family members in Poland and in Mississauga and Toronto.

Richard was born in Malbork, Poland and as a young boy, he started taking music lessons. Music was Richard’s life. He played the accordion, clarinet, saxophone, keyboards and piano. In his early twenties, together with his two classmates, Jan and Zbyszek, they formed a band and started playing in luxurious hotels in former Yugoslavia on the Adriatic coast and Slovenia.

In 1978, Richard emigrated to Canada from communist Poland and spent a few years in Edmonton, Alberta where he opened a music school and played in hotels in Banff and Edmonton. Together with Jan Lewan, he played for the Canadian Pacific Hotels, crossing Canada from the west to east coast many times. In 1985, Richard moved to Toronto where he met his future wife. Two years later, he married Alicja and a couple of years later they started a family. His and Alicja’s first date happened to take place in the Bahamas after a funny series of events, and their marriage continued to be filled with laughter, travel and adventure.

In 1994, Richard and his family moved to Niagara Falls. Soon after, he met another Polish musician, Joe, and formed the band “Spectrum.”

In 1996, Richard began working at Casino Niagara and later transferred to Fallsview Casino where he made countless good friends during his 18 years in the slot department. While employed at the casinos, he still played music on weekends. After retiring from the casino, Richard took time to travel. Together as a family, they travelled to Poland, France, Spain, Scotland, England and Florida. Richard’s favourite vacation was on the cruise ships to Cuba, Mexico, Cayman Island, and Bermuda. In 2018, Richard, Alicja, and Marta had a wonderful family vacation in Calafell, Spain which holds very special memories. He loved spending his summer weekends sailing on Lake Ontario with friends from the Port Credit Marina. After retirement, Richard continued playing music in retirement homes across the Niagara Region and teaching music to students. With his welcoming demeanor and generous spirit, Richard brought laughter, music, and a good joke to every room he entered. He will be deeply missed by all his family and friends, but his spirit will live on through all the memories, stories and music.

Our special thanks to Dr. Conen, Martha McKelvey NP and nurse Lilia Schewchuk for their care. Lilia always brought a smile to Richard’s face on her visits. We would like to thank all of Richard’s family and friends for your messages, flowers, food, and prayers. Your support means the world to us during this difficult time.

The cremation has taken place and Richard’s ashes will be taken to his birthplace according to his wishes. Essentials Cremation and Burial Services (905-354-2133) has been entrusted with arrangements. A Celebration of Life will take place sometime in the future, and the information will be updated on Richard’s tribute page at EssentialsNiagara.com when it is arranged. Donations to the Walker Family Cancer Centre or to help build a memorial bench would be appreciated by the family. Online condolences can also be shared on Richard’s tribute page at EssentialsNiagara.com. 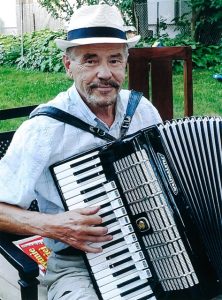 You can post a condolence to the family below (up to 200 words). To add a photo, click on the camera icon. If you plan on making a donation, please notify the family by posting your intent in a condolence.

“In the loss of Husband” May you be comforted in knowing that your husband and Marta’s father will be remembered as a wonderful man who meant so much to so many. May he Rest In Peace. With deepest sympathy. Our thoughts and prayers are with you. From Mary, children and grandchildren.

Thank you for reaching out to tell me of Richard’s passing. I am so saddened, he was teaching me to play to piano and every week he would show up, encourage me, teach me something new, and then play for me. He was a skilled pianist, loved his family so much, and was such a good man. I’m grateful to have known him. With deepest respect and condolences to his wife, daughter, and family. The world is not shining as brightly since his death.

This is a very sad time.
I lost my long, long time music-soul friend and also my music school mate.
Both of us studied classical music in the clarinet class in elementary school in Gdansk, Poland – and then continue our study in the high music school.
52 years ago, I joined Richard and two other friends – Zyszek Lasek (another clarinet class student, who also played drums and piano) and Andrzej Mulkowski (a popular rock singer) to spend summer vacation in Macedonia (a part of former Yugoslavia) to entertain local students as part of the students exchange program. This was the beginning of our 2 long years of playing together every night and entertaining maaaany hundreds of local and international visitors, playing music in the very best and popular hotels, night clubs, Casinos and theatres in places along the beautiful Adriatic coast.
In one of the places, I have met my sweetheart Jessica who has been my life partner since. And in fact – we are celebrating our “BIG 50 together” this month!
I can only thank Richard for inviting me to join him on this life changing journey on that day 52 years ago. While leaving in Los Angeles – I spoke to and chatted frequently with Richard and promised each other that one day we will play again. Perhaps in our dreams…. this will still happen.
These memories of terrific times we spent together will last forever.
So long my Friend! Best Regards and sincere condolences to Richard’s Family and Friends!
Jan and Jessica Cherkowski

I am really sorry for your lost. Richard was a great teacher for my kids, they really look forward for his class, his love for music was transmitted to them with not doubt He will be greatly missed, but we are thankful that he was part of our life.
We will have your family in our prayers.

Jeff and I are so very sorry to hear of Richards passing. Our sincere condolences to the family. May he Rest In Peace.

My deepest condolences to uncle RICHARD’S Family!
He was such a talented and good hearted person. RIP

So very sorry to hear this news, always enjoyed our conversations, my condolences to you all at this time.

My Condolences to Alisha and Marca for the loss of your loved one.

We are so sad to hear this news. Richard was an amazing piano teacher, and we will miss him very much.

Dear Ala and Marta, I want to thank Richard for all the great moments we shared, singing, dancing, laughing, bringing family together. He knew how to enjoy life and his music will always be among us. I truly loved this man. He left a mark on me.

So sorry for your loss. My prayers are with you during this difficult time. Richard had a great sense of humor. I enjoyed working with him for many years He made me laugh often. I share many great memories with him. He will be greatly missed. RIP Richard.

We are very sorry to hear of Richard’s passing. We always enjoyed him playing his accordion at family functions. We would like to send our love and deepest condolences to Ala and Marta.

Our sincerest condolences. Wujek Ryszard with be greatly missed. We always loved how he played the accordian at every family party however big or small the celebration. Rest in Peace.

I’m so sorry to hear about Richard’s passing. My condolences to his family. I worked grave shift with Richard for years and I always looked forward to his jokes and stories. He could make anyone laugh. RIP Richard

So very sorry to hear of Richard’s passing.I worked with him on the graveshift for many years.He was always so funny,telling stories and most of all how proud he was of his family.My sincere condolences 🙏🙏

We are sorry to hear about the passing of Ryszard. We send our deepest condolences to his family and loved ones. He has been a great friend to our family for the last 30 years, enriching all our lives with his kindness and wonderful music. His memory will live on through everyone’s heart he has touched. He will be deeply missed.

Rest in Peace Richard. We had so many good times and laughs working together at the casinos.
Deepest sympathy to his family

Very sad to hear of Richard’s passing. Worked with him on the night shift and he sure was entertaining with his jokes and many a story of his days gone by! He spoke of his wife and daughter often. He sure had a life well lived. My condolences to his family and I’m sure he’s playing great music with the angels. RIP Richard

Dear Alicja and Marta, my deepest condolences on the loss of your husband and father Ryszard. I enjoyed my many conversations with him and will miss seeing him out and about in Polonia. Sincerest sympathies to both of you and all your extended family.

From our family to yours,
Sending our deepest condolences, we’re thinking of you during this difficult time. We got to know Richard and his wife through Mojito House Bar and then Richard went on to play music alongside my father (Pedro) at bar. He was an amazing friend and a very kind man. He will be missed dearly. Rest in peace, sending our love.

So sorry to hear of Richard’s passing prayers for the family will always remember are days on midnights at the Casino RIP friend.

I was saddened to hear that Richard passed away. Sending healing prayers and comforting hugs….

Sending you all our love and prayers. May all of your wonderful memories give you strength and bring a ray of light during this very difficult time. Our deepest condolences.

We are heartbroken to hear the news of Richard’s passing. He taught piano to my children for the past 3 years. My kids looked forward to their Thursday lessons and were always excited to show Richard what they had learned. His love and talent for music was obvious. He will be missed greatly. Condolences to his wife and daughter.

It is with great sadness that we heard the news about Richard. We would like to send our love and prayers to the whole family and condolences.

May he rest in paradise. Until we meet again.

The family of Ryszard "Richard" Szatkowski would like you to consider placing a donation to one of the following charities:

Walker Family Cancer Centre *Under Fund Allocation, please select Walker Family Cancer Centre*
Donate Online Donations will also be accepted to build a memorial bench in Richard's memory in Port Dalhousie, Ontario. Donations can be made by cash or cheque through Essentials Cremation and Burial Services, or made by etransfer to Alicia Szatkowski through her email: [email protected]

Note:  If you make a donation, please notify the family by posting a condolence.

Click on the heart to send your love to the family.  Additionally, you can write a condolence located on condolence tab.